The Russian Federation is a transcontinental country spanning over the continents of Europe and Asia. It is the largest country in the world, and has the 6th largest GDP globally. Their official and national language is Russian, in which their national anthem –“Государственный гимн
Российской Федерации” “Gosudarstvenny gimn Rossiyskoy Federatsii” – “State Anthem of the Russian Federation”, which you can listen to below.

The demographic makeup of Russia consists most prominently of people of Russian backgrounds; the composition is as follows; 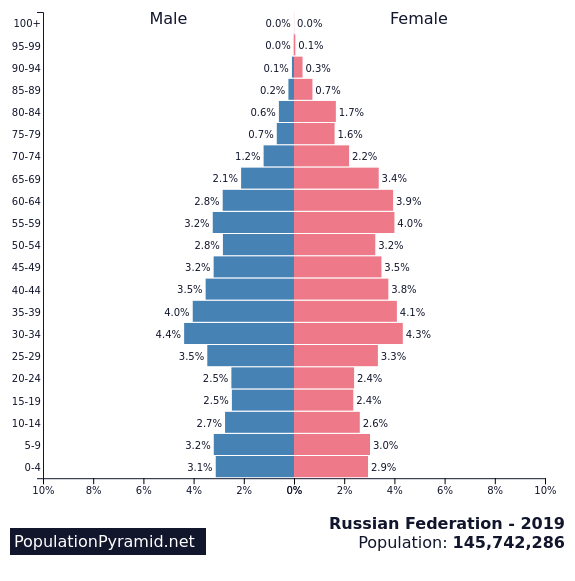 Throughout Russia’s past, precedent censuses indicate a population incline in the wake of tumult. Following the fall of the Soviet Union, a series of financial crises resulted in a decline in quality of living, employment, fertility, and ultimately, the population. In the year 1992 – a time at which the population of Russia stood at 148.3 million people, Russia had observed the first decline in population since world war 2. Between 1992 and 2002, a decline of 2.1% was seen in the Russian population as many people continued to readjust to the political climate of the Russian federation from the soviet union. The population continued to decline up until 2009, where the population low increased to 142.7 million people. This decline, despite the fact it would imply a decrease in productivity, yielded results on the contrary – the GDP rose from $460.3 billion to $1.2 trillion in 2009, sustaining a decrease of $0.438 billion from the GFC of 2008. From 2010 onwards to the present day, the Russian Populus has seen an increase from 142.8 million citizens, to 144.5 million; This phenomenon can be justified perhaps by the increase in living condition standards and quality of life in the 1980s due to Gorbachev’s action in implementing policies Glasnost and Perestroika, thus yielding a more bountiful generation of adults than in earlier decades.

Moscow (Russian – Mосква), is the capital city of the Russian Federation. 13.2 people reside within Moscow, the largest on the European Continent. Moscow acts as the political, economic, cultural and scientific center of Russia.

Moscow is also home to the Moscow International Business Center, a place of significance, especially within the context of investments. This area is projected to be an area of great economic activity, living quarters and entertainment for the whole of Eastern Europe

For Statistics Regarding the Country, Please Visit the Quick Facts Page (click)

The governmental system of Russia and its stability will determine the ease by which reforms surrounding various industries can be made. As the Russian Federation is considered a democracy, the Russian political framework is that of a sovereign democratic federation, allowing for the Russian federal assembly to be built of two main tiers – Federal Council –  An upper house made up of representatives elected from each of Russia’s administrative divisions, and that of the Duma – A lower house comprised 450 popularly elected representative. Along with this, the president’s nominee for chairman of state government is only approved through the Duma. The power of the federation is, however, placed predominantly in the president as if the Duma rejects a nominee three times or passes a vote of no twice in three months, the president has the authority to dismiss the entire lower house and hold an election for their seats. In passing legislation, as with most democratic countries, the bill must pass through the Duma before proceeding to the Federal Assembly. In regards to the amendments of a bill or reform to include presidential reservations, the movement can be either overridden or passe with a majority vote. Although the influence of the president may present potential impediments by way of preventing the passing of a trade agreement or abolishment of a tariff with a country in broadening export horizons in the increased output of the invested industries, the upper and lower houses maintain power over international relations and trade, acting in the best interest of the nation and its economic prosperity. Further, in the event that the president attempts to veto any such economically beneficial or imperative trade deal in the growth of the Russian productivity and GDP, a ⅔ vote of the two houses and the vote of the Russian constitutional court, the president can be ousted in their intention and actions in acting in their best interest over that of the nation.

Furthermore, by way of stability, a political preference towards a right-wing administration has been shown in the continued interest and election of Russian President Vladimir Putin. Being elected in 2000, inheriting a derelict economy and political climate, Putin restored the russian political system and economy through significant economic and political reforms, inspired and driven by capitalist ideals. After serving 2 consecutive terms up until 2008, Putin served briefly as prime minister, being re-elected as president in 2012 and in the recent 2018. With the limit of the term changed from 4 to 6 years under his watch, it is seen that his mode of operation in controlling the russian economy and Political sphere is aligned with the morals and beliefs of the people of Russia. With significant economic increase seen in the spheres of shipping and trade through the reduction and removal of trade tariffs, it can be deduced that in the investment of $15 billion USD into the neglected industries solely due to a lack of funds available, the investment will not only align itself with the approval of the president but the public, thus gaining civilian support in using this money to motivate economic growth.